At Monday’s presidential contend, host Hofstra University ruffled feathers by reportedly moving to prevent journalists, attempting to file stories from the scene, from relying on their own wireless hotspots to get online. The move was seen by some equally an attempt to force reporters to utilize the venue’s wireless service – said to cost $200 – and defenseless the attention of the FCC. Indeed, one Commissioner called for an investigation on Tuesday afternoon, although Hofstra’southward practices may have differed, possibly materially, from those that have landed other venues in trouble with the Commission.

The FCC’s History on Wi-Fi Blocking


The FCC has long staunchly and actively opposed “Wi-Fi blocking,” which it describes as “intentionally block[ing] or disrupt[ing] personal Wi-Fi hot spots on [the] premises [of a commercial establishment], including as function of an effort to force consumers to buy access to the property owner’s Wi-Fi network.” In 2014, the Commission reached a $600,000 settlement with Marriot over the practice; in 2015 Smart City Holdings agreed to pay $750,000 to settle similar allegations; and a few months after the Commission threatened K.C. Dean with a $718,000 fine for blocking Wi-Fi at the Baltimore Convention Centre.

After hospitality industry groups petitioned the FCC, seeking clarity regarding what network direction techniques would be immune, the Committee posted an “enforcement informational” on its website headed, “Warning: Wi-Fi Blocking is Prohibited. Persons or Businesses Causing Intentional Interference to Wi-Fi Hot Spots Are Field of study to Enforcement Activity,” and promising to “aggressively investigat[eastward] and act[] against such unlawful intentional interference.” The same day that the enforcement informational went up, Commissioner Jessica Rosenworcel, speaking at the 2015 “State of the Internet Briefing,” underscored the FCC position, saying, “Allow’s make clear that we will not tolerate malicious or willful interference with Wi-Fi.”

News of Hofstra’s reported attempts to restrict journalists’ Wi-Fi options at Mon’s debate reached Commissioner Rosenworcel speedily.  Early Tuesday afternoon, she said via Twitter that “something is not right” with the goings on at Hofstra, and tweeted out a link to the FCC’s Consent Prescript with Smart Urban center Holdings. About an hr and a half afterward, she tweeted, “My office has asked the @FCC Enforcement Bureau to investigate, figure out what happened.” 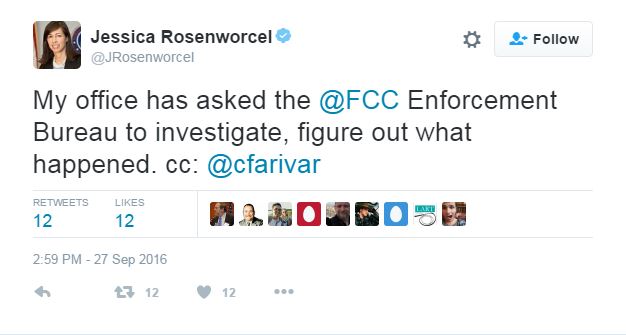 Service (and Other) Concerns

A few hours afterward Commissioner Rosenworcel brash the twitterverse that the Enforcement Bureau had been contacted, announcer Cyrus Farivar, who writes for the technology publication
Ars Technica, tweeted a brief argument he had received from Hofstra. That statement emphasizes the service issues that a roomful of individual Wi-Fi hotspots can pose: “For Wi-Fi to perform optimally the system must be tuned with each access point and antenna. When other Wi-Fi admission points are placed inside the surroundings the result is poorer service for all.” Concerns near the impact of the FCC’s enforcement position on a venue’southward power to provide adequate service while maintaining cybersecurity are real, and have been the subject of comments past me and others. Equally Dian Barber noted in
Facility Manager Magazine

Tasked by clients with providing robust connectivity and restricted from interfering with these “hotspot” devices by Section 333 of the Communications Act and a 2015 FCC Enforcement Informational, venues face huge issues of interference, integrity, security, compromise of  mission-critical services and “racket” disruption while withal beingness expected to provide an exceptional quality of service.

Needless to say, it is a hard needle that Hofstra needed to thread during what has been called the near-watched presidential debate in history.

Commissioner Rosenworcel’south business concern is that the Wi-Fi blocking activity violates Section 333 of the Communications Human activity, which provides, “No person shall willfully or maliciously interfere with or cause interference to any radio communications of whatsoever station licensed or authorized past or under this affiliate or operated by the Us Authorities.”  47 U.S.C. § 333. This position is not entirely uncontroversial within the Commission – Commissioners Ajit Pai and Michael O’Rielly both dissented in the 1000.C. Dean action – and has all the same to be tested by a court.

The precise details of what went on at Hofstra remain somewhat murky, merely reports advise that – unlike in the Marriot, Smart City, and Thou.C. Dean cases – no
automated
interference techniques were utilized at the debate. Rather, according to some, technicians patrolled the press room using Wi-Fi hotspot detection devices, and asked hotspot-using journalists to turn them off or have their credentials revoked. I outlet reported hearing from the FCC that “Preliminary reports suggest that Hofstra was interim on an understanding with media guests to not apply personal Wi-Fi hotspots while on the university’s premises,” which “is different from active Wi-Fi blocking, or deauthentication, which the FCC’south Enforcement Bureau establish to be occurring in prior enforcement deportment.”

If correct, these factors may distinguish the Hofstra scenario from the prior FCC enforcement actions, sufficiently to avoid an enforcement proceeding. However, this is a developing expanse, in which policy is arguably written one enforcement action at a time, so the expected FCC investigation will be one to watch.

Disclaimer: This post does non offer specific legal communication, nor does information technology create an attorney-customer relationship. You lot should not reach any legal conclusions based on the information contained in this post without first seeking the advice of counsel.

Abraham J. Rein is a Chief in the House’south Internal Investigations & White Collar Defense Grouping, Co-Chair of its Information Privacy & Security Group, and a member of the House’s Diversity and Inclusion Committee. He focuses peculiarly on the intersection of technology and the law, advising clients on legal aspects of data security, social media compliance, electronic discovery, the application of sure constitutional rights in a digital era, and related topics.